Ruben Malayan (1971-) is an award-winning art director and visual artist.

His career in graphic design spans over twenty years — crossing over into the fields of visual identity design, typography and calligraphy. For over a decade he has been working on research about the art of specialized scripts, and has developed a portfolio of unique Armenian calligraphy. Ruben is also notable for his work in social activism, as a founder of the 'Armenian Genocide in Contemporary Graphic & Art Posters' project, and for his protest art contributions to the 2018 Armenian Velvet Revolution. Over the years he has lectured and taught workshops of calligraphy in the United States, Canada, Russia, Poland, Romania and Armenia. Ruben's work has been published in a number of books and magazines in Israel, Armenia, US, Netherlands and France. He exhibits art locally and abroad, and is currently teaching a Visual Communication course at American University of Armenia and drawing at Terlemezyan Art College. 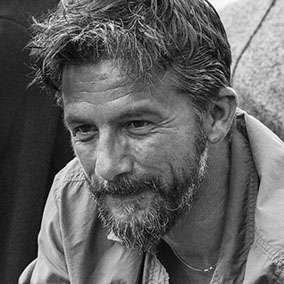 • Over fifteen years of work experience as an art director and visual effects supervisor, including feature film production.

• Over twenty years of experience in graphic and communication design.

2016 Lecture and masterclass on the Art of Armenian Calligraphy- Yerevan State Art College after P. Terlemezian

2015 Graphic poster "The Dark Chain of Human History" on display as part of "Evil: The Matter of Intent" exhibition at Hebrew Union College Museum, NYC

2015 Graphic poster "The Dark Chain of Human History" on display as part of "Evil: The Matter of Intent" exhibition at Hebrew Union College Museum, NYC.

2015 Calligraphy for the cover of Scout Tufankjian “There is Only The Earth”.

2015 Graphic work published in '99' publication on Armenian Genocide by PanArmenian.net.

2011 Member of a Jury on “One Shot” International Short Film Festival, NPAK, Yerevan.

2011 Calligraphic works and an essay on Armenian calligraphy published in 'The World Encyclopedia of Calligraphy' Sterling Publishing, NYC.

2010 “The Art of Calligraphy: Script in Its Purest Forms” article published in Armenian Weekly & Asbarez.